Catherine Weaver asked me to read her novel, "Phoenix Down". It is a sequel to "Gold Dust" in the "Island of California" series. I have previously reviewed the first book and its review can be found here: "Gold Dust". For this book I will examine Plot, Character and Polish and then assign a grade.

The book's tone is immediately set. At the start, Alex wakes up to see a leprechaun riding a giant bunny and saying, basically, "come with me if you want to live". This leads to a new adventure and an awful lot of running.

The sequel to "Gold Dust" has a great plot. It is fast paced and follows the fallout of the previous book's climax. This makes it feel like an outgoing adventure and creates a greater sense of continuity. Furthermore, Alex's actions prove how much she learned from the previous book. Certain relationships also develop and I find it to be appropriate for their ages and experiences.

There is a good bit of world building. Phoenix Down is a magical catalyst and this develops the internal system of magic; by explaining what it can do, Miss. Weaver contrasts it with gold dust and standard magic. It's interesting stuff. Also, the previous book steered clear of population centers, so this one gives a good look at what the society on "the Island of California" is like. It's basically an Amazonian Lady Land but with some interesting nuances provided by the phoenix.

The "no-magic" effect returns and it is even creepier than last time. It is longer in duration and heavier in effect. The first chapter of it is called "we fight the zombies we've become" and shows Alex drifting in and out of Heroic Resolve and Heroic BSOD. No amount of third person description could match that; a fantastic use of show vs tell.

Finally for this section, I like how the plot develops. It holds an overall steady course but makes a number of twists and turns along the way. There are certain things that I wasn't expecting. Furthermore, I like how Miss. Weaver is able to resolve the major conflict in order to give the book closure while still leaving threads dangling for future books.

Alex Lee has transitioned from Unlikely Hero to more Reluctant Hero. She'd rather enjoy her Spring Break than go on another world-saving adventure, but she recognizes that Herman Mendez is a Big Bad and she's the one to stop him. Also, there's no more doubting her ability anymore; her actions, sometimes, but not her ability. As a result, her narration is more dry and playfully self-depreciating then panicked or truly putting herself down (although that sometimes happens too).

Ian has experienced a dramatic personality shift. His first scene in this book has him acting frigid to Alex and then going on a mini-rant about misogyny. It's like he was indoctrinated by Herman Mendenz or someone else in the pro-men/anti-amazon movement. More striking is his treatment of Celeste. The sum total of his motivation in the previous book was finding and rescuing her from Herman Mendez, and she is still being targeted by him but Ian doesn't seem to care. This happens before Dash is introduced and so I can't chalk it up to Jealousy-induced stupidity.

I like Celeste's development as well. While Mendez is still menacing her, she's stepped out of her role from the previous book; more working against him then just getting away from him. I can think of her more as "Alex's portal opening partner" then "Ian's captive cousin".
While the story doesn't specify this, I think that Celeste is more skilled with magic than Alex because she deliberately chooses to use only her singing voice when casting spells. For Alex, that is a handicap.
Third, Plucky Girl! While Ian and Alex had a break from adventure, Celeste still hasn't been able to go home yet. Both books have been a continuous adventure for her yet she's soldiering on.

The Mendez brothers continue to make great villains but for different reasons. Gabriel was previously Ambiguously Evil and now he reveals himself as The Unfettered For Science. Listening to him zealously talk about what he could do with Phoenix Down, just for the sake of doing it, is frightening. Herman, like before, is a power-hungry scumbag, and now he shows that he is vindictive as well.

The book looks good. While I still think the first person narration is odd without a frame narrative, I now get the sense that one is incoming. It's like this is an auto-biography of how she became famous.


Click here for the next book review (for fun): Tenryu the Dragon Cycle - Volume 1


Brian Wilkerson is a independent novelist, freelance book reviewer, and writing advice blogger. He studied at the University of Minnesota and came away with bachelor degrees in English Literature and History (Classical Mediterranean Period concentration).

Posted by Brian Wilkerson at 7:09 PM

Sassy Saturday: the Girlfriend of an Exiled Mage

Welcome to another week of Sassy Saturday at Trickster Eric Novels.  Every week will be an excerpt from one of my novels showcasing a kick-... 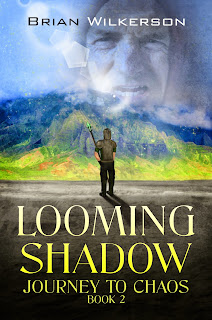